Truestamp is a SaaS platform that cryptographically proves the integrity + timestamp of data, efficiently linking it to Stellar.

What service is Truestamp providing?

We provide our customers with the ability to easily enrich their most important data with cryptographic proofs attesting to timestamp, integrity, and provenance. Commitments are secure, lightweight, and extremely efficient. They can be shared in a Tweet and independently verified using open-source tools.

Truestamp creates solutions that are privacy preserving. The use of cryptographic one-way hashes doesn't allow us to learn anything about private data. The customer is always in control over what's shared.

What problems can it solve?

We strive to help our customers "Know What's True". We see many use-cases in a variety of fields.

We enable our customers to address each of these concerns.

How does it work?

Truestamp provides a distributed HTTP API, and web, command line, and developer SDK's to interact with it. Our API runs at the edge of the network in nearly 300 global data centers. It can ingest hashes, and metadata, at scale.

We ingest this data into powerful Merkle trees. They reduce massive amounts of data to a single 32B hash. It's this hash that we submit to Stellar, as needed, and no more than once per minute. Its so efficient that if we received millions of items per minute, transacting every minute for a year, we would still store on-chain data smaller than an iPhone photo.

From the Merkle inclusion proofs, and transaction logs, we create a verifiable commitment. Data integrity is proven by Merkle trees, bound to Stellar ledger transactions, and timestamps are determined by ledger block time alone.

Our open-source verification tools replay this cryptographic verification, with comparison to on-chain data, in real-time. 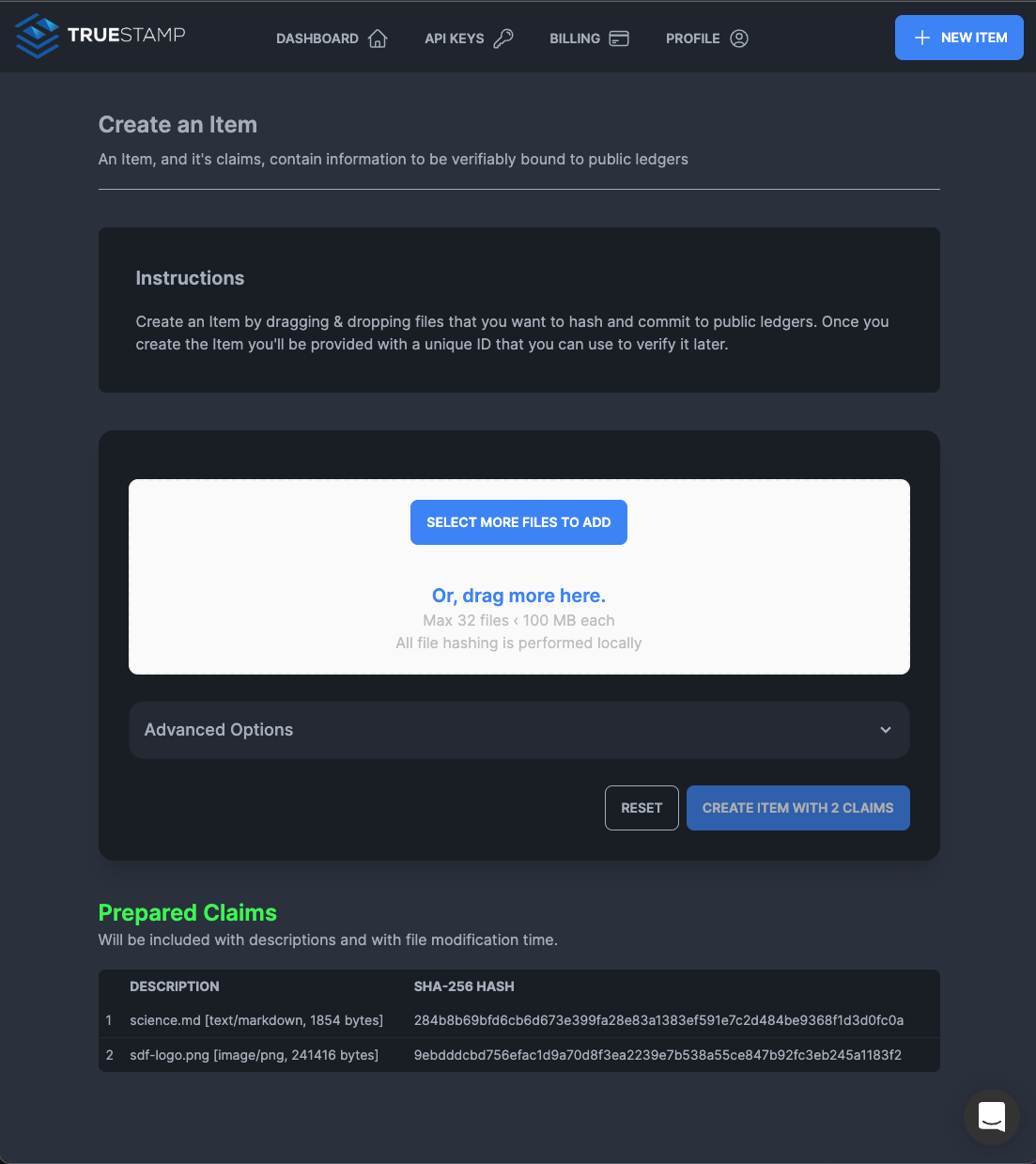 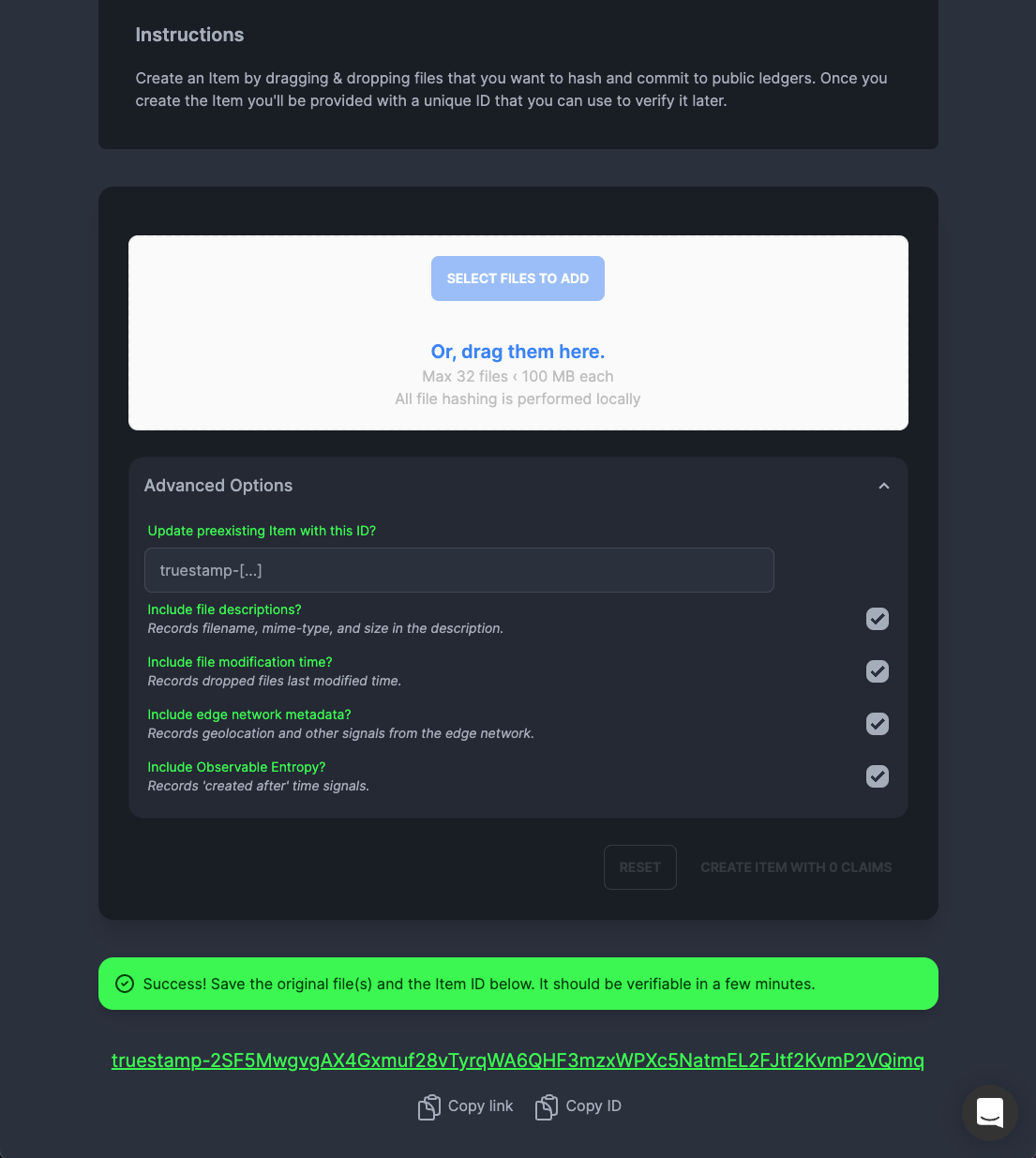 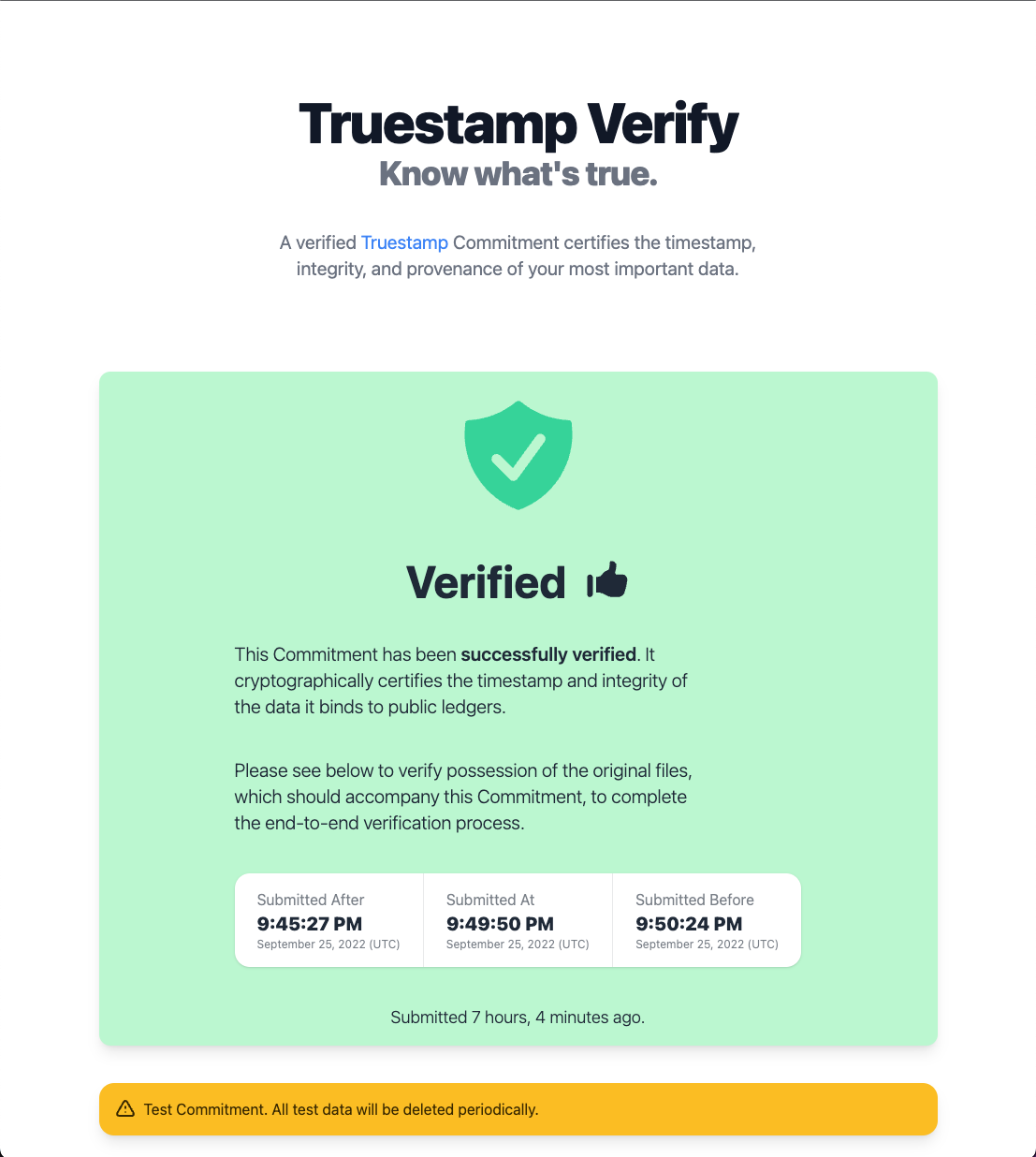 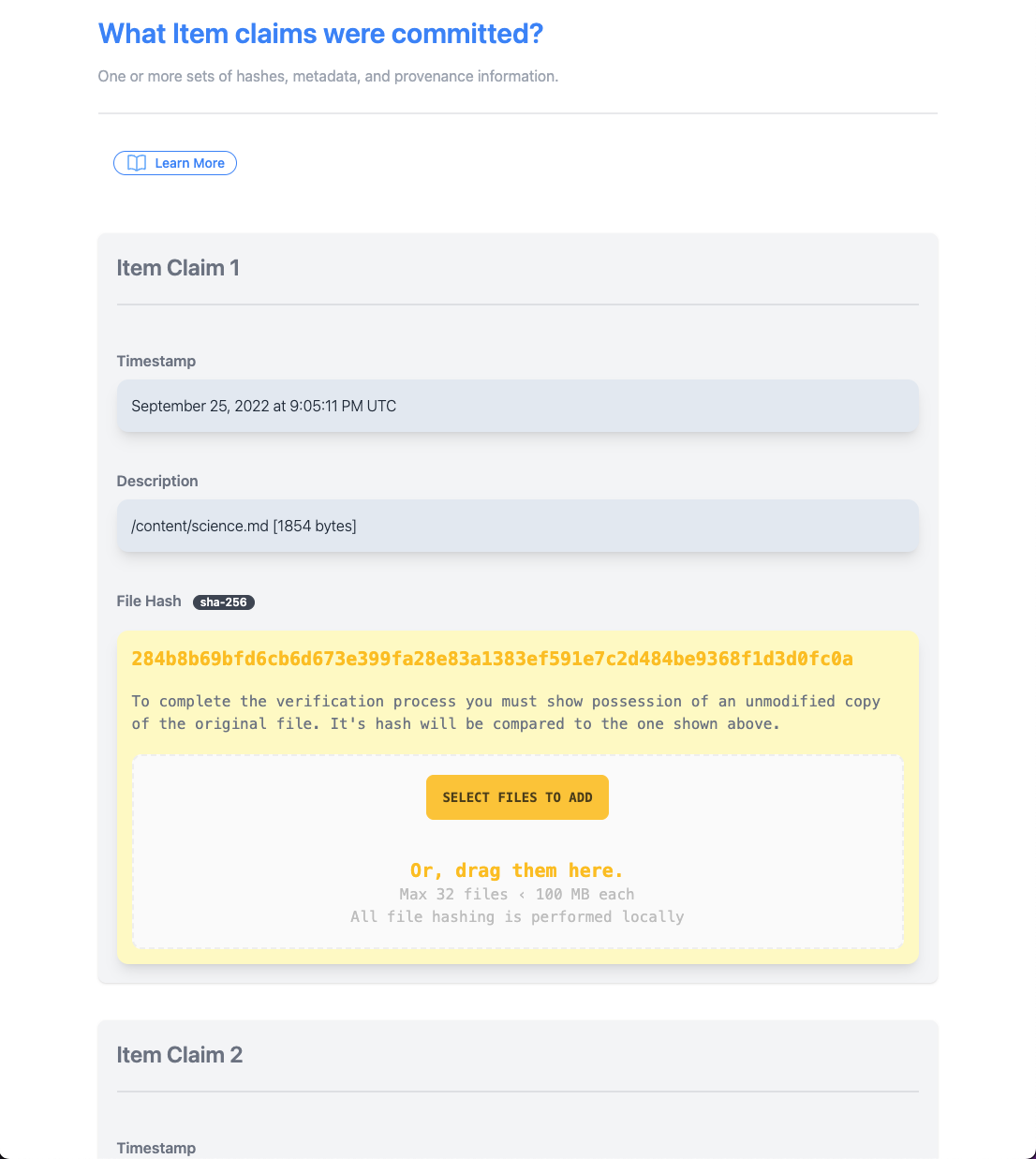 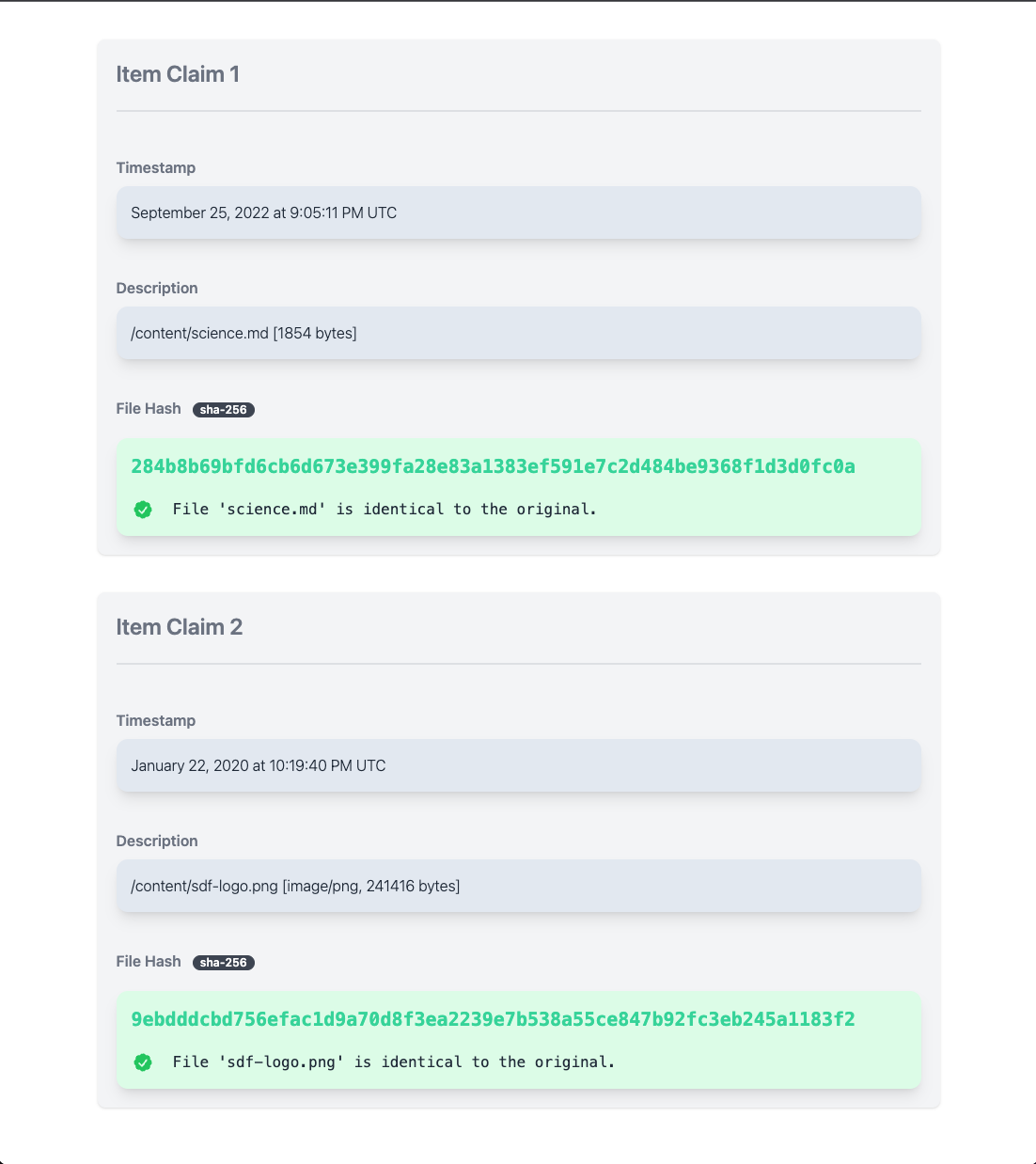 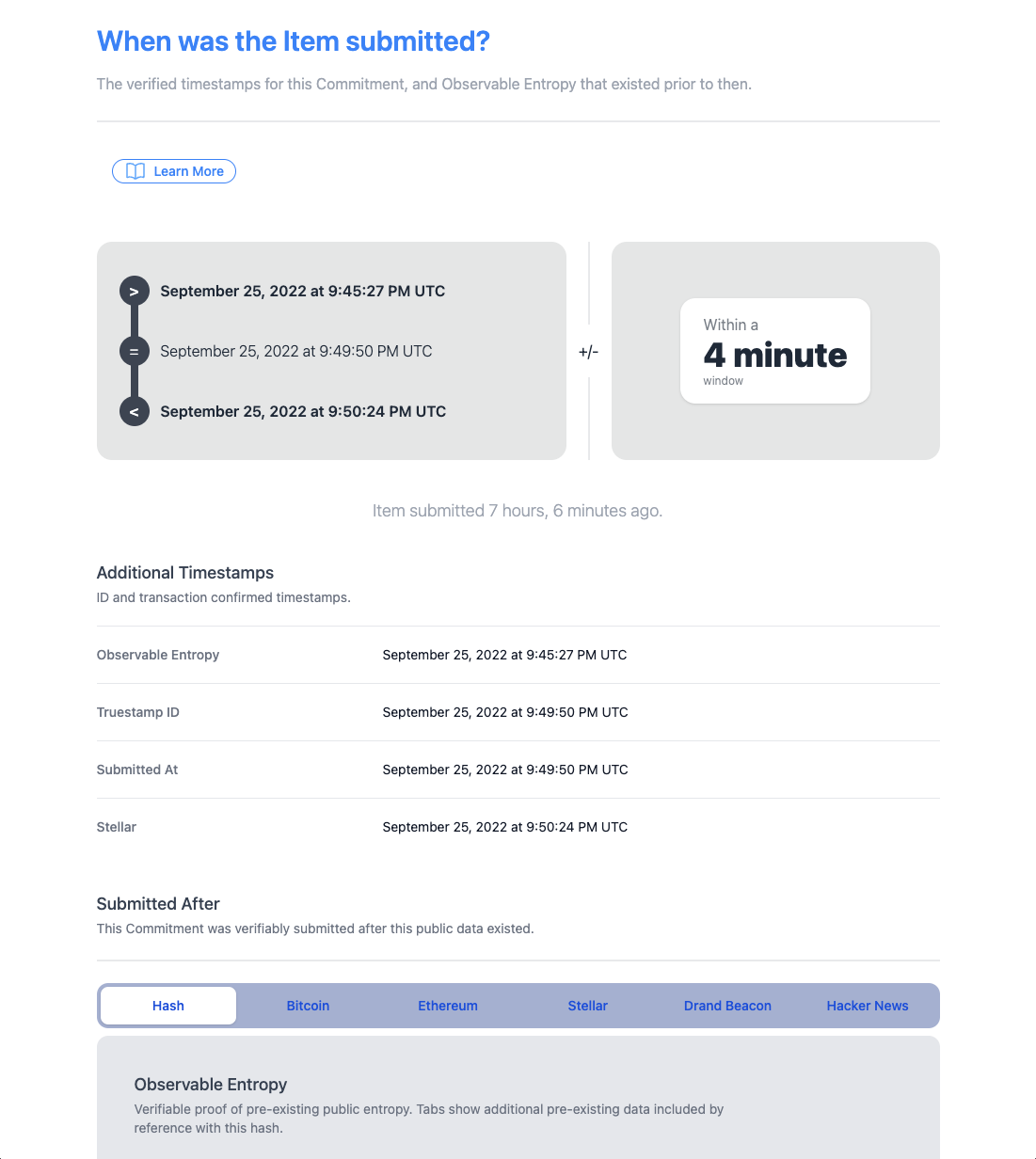 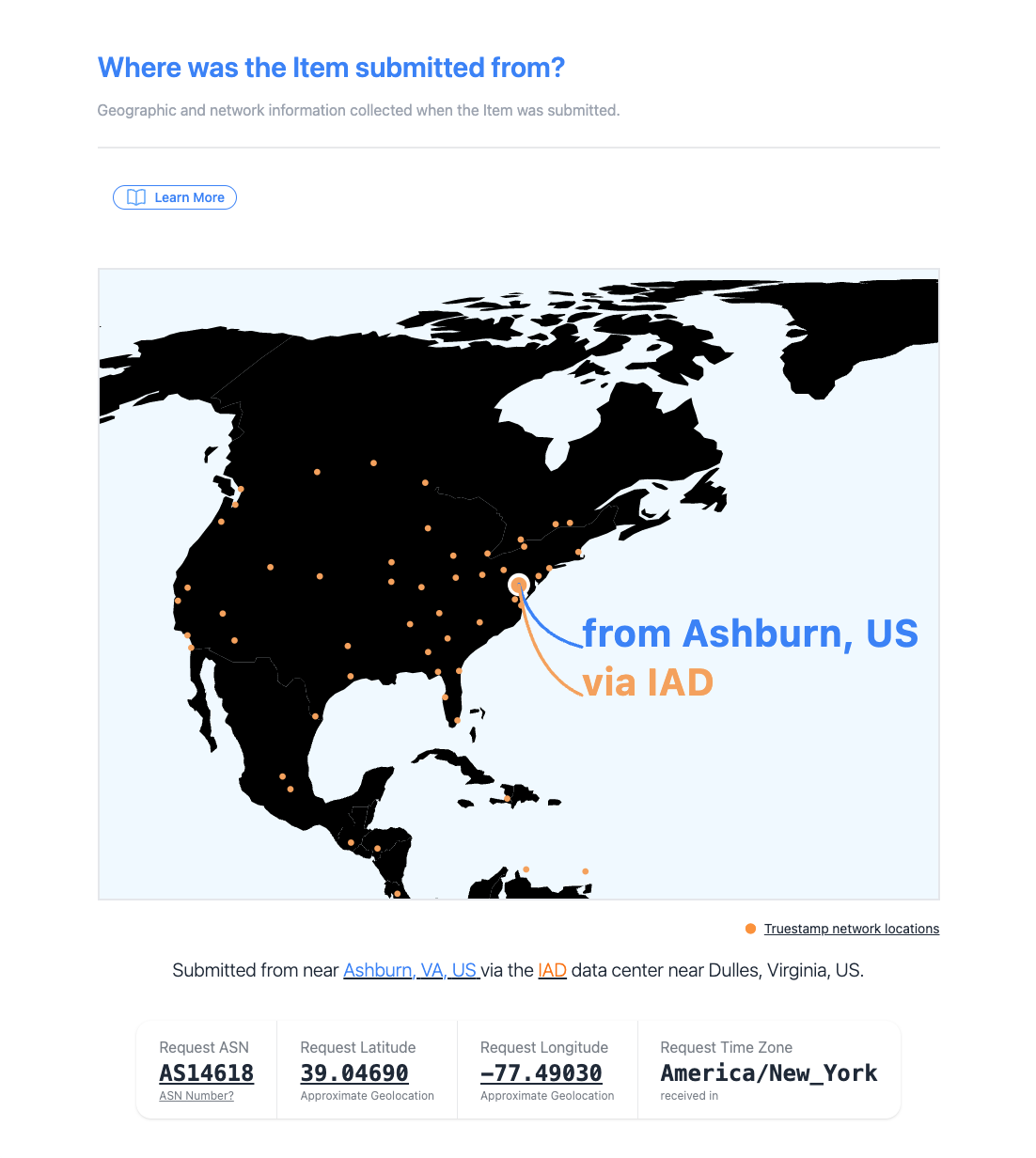 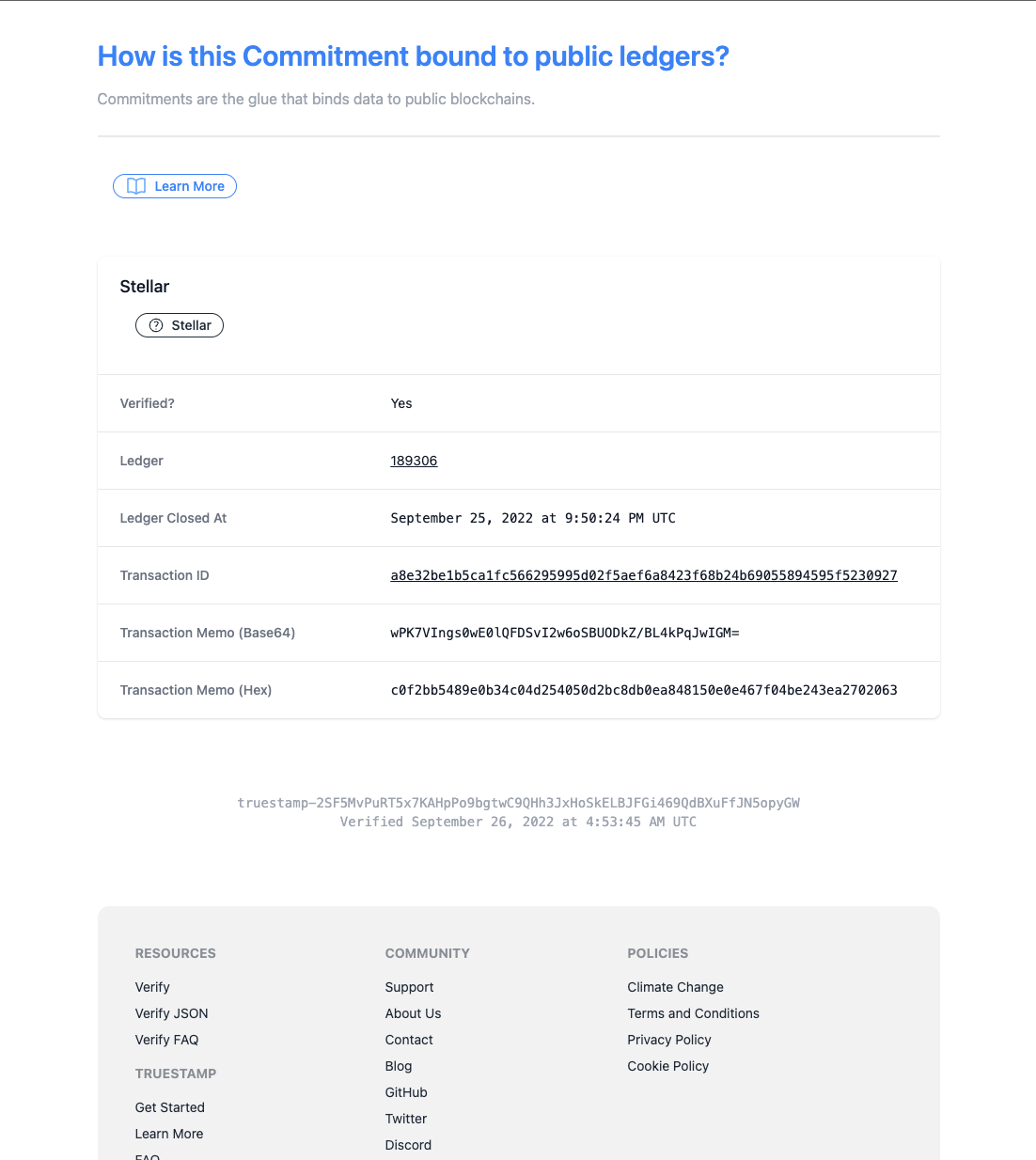 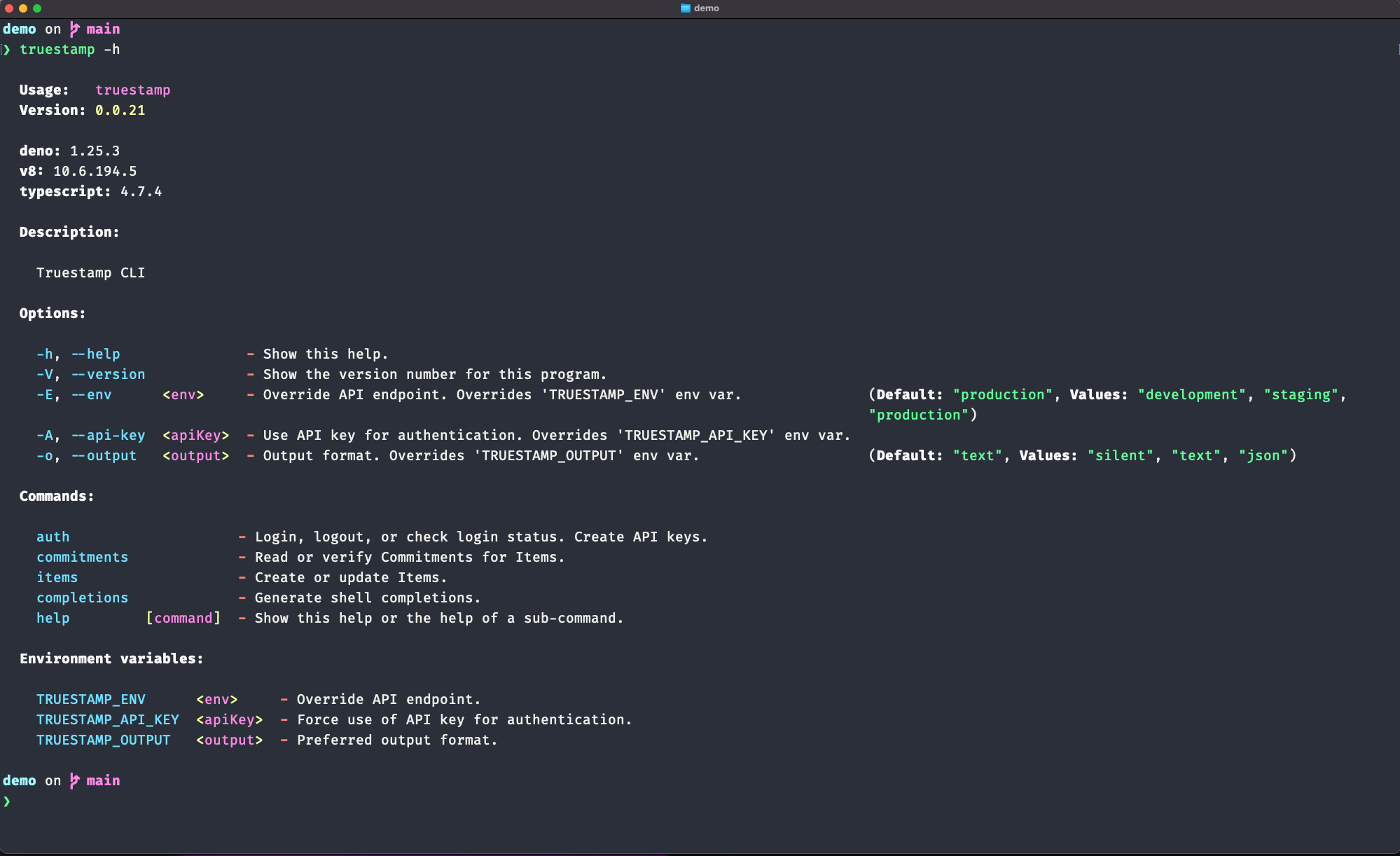 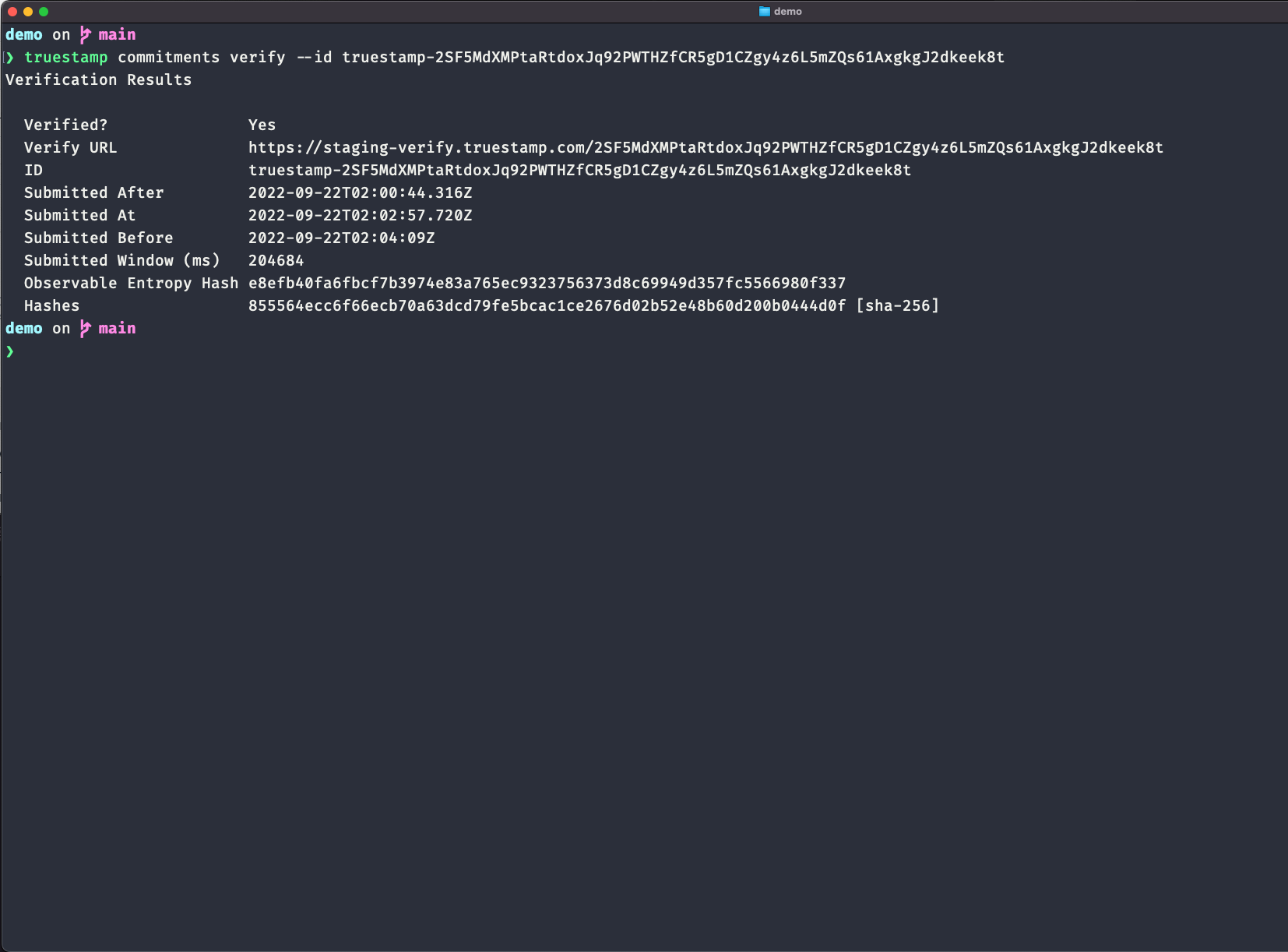 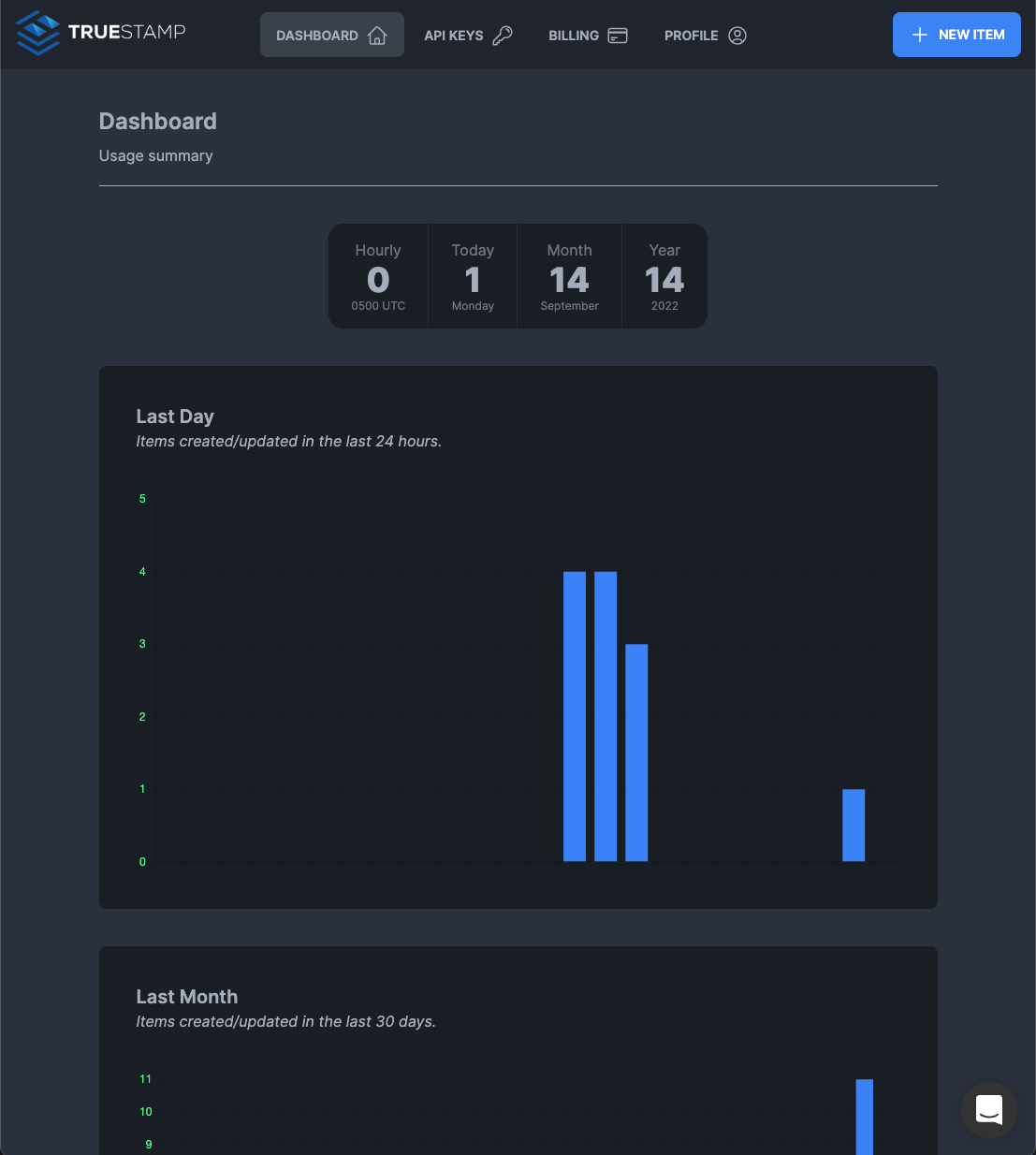 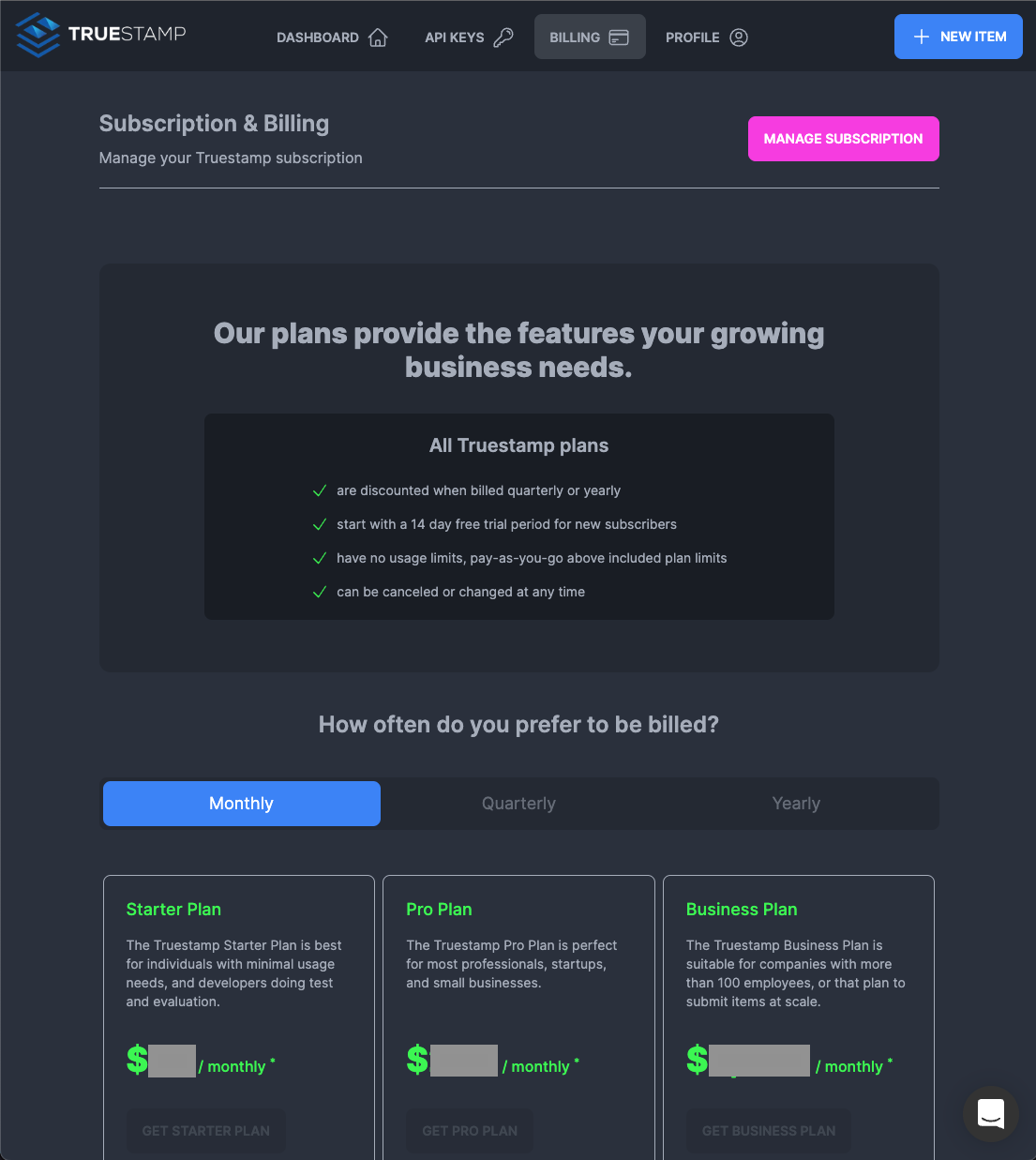 Truestamp has made a great deal of progress since first submitting to SCF and being selected as a candidate for the SCF#10 round. We are about to enter open beta and start accepting customer subscriptions by mid-October 2022.

Some of the key development milestones we have achieved are:

We have raised seed funding previously which has allowed us to operate during our major development phase.  We are now actively seeking additional investment to allow the company to enter its public growth phase.

The process of going through our candidacy with SCF in the SCF#10 round was extremely helpful. We received quite a bit of positive, and constructive, feedback from members of the Stellar Development Foundation, as well as verified voters in the last round that we have internalized and fed directly into our development efforts.

Our product has benefited immensely from our SCF candidacy. Now we aspire to be a candidate, and be chosen as one of the winners, in SCF#11.

We'd like to share with you here some of the interesting, and on-point references which help motivate and inspire us. These help demonstrate the need for the tools and services Truestamp provides.

For twenty years Sam Gregory has enabled people to use the power of the moving image and participatory technologies to create human rights change. He is Program Director of WITNESS, which helps people use video and technology to protect and defend human rights.

In his technology op-ed for The Hill, the newspaper devoted to US Capital Hill policy and politics, he discusses how an  ‘authenticity and provenance’ infrastructure deserves close attention to its possibilities.

He also discusses the Coalition for Content Provenance and Authenticity (C2PA) which addresses the prevalence of misleading information online through the development of technical standards for certifying the source and history (or provenance) of media content.

Truestamp is pleased to be a member of the C2PA and we think there is synergy between their technical solutions and what Truestamp offers.

In the context of talking about the ethics of using deep-fake technology in film and television, famed director Jon Favreau discusses what could very well be a description of Truestamp. Here he is talking not only about how they incorporated the idea of blockchain identifiers in his show "The Mandalorian", but how he thinks about the thorny issues of synthetic content in his industry and the modern world in general.

As a Star Wars fan myself, and someone deeply interested in the subject matter, I can't tell you how enjoyable I found that discussion.

Truestamp has a clear role to play when considering common issues related to the authenticity and chain of custody of digital content. As an example, the hashes of crime scene photography, data taken through legal process, or body-cam evidence can be committed to Truestamp at the time of capture. Provenance metadata indicating who/where/when it was captured can be included at each point of transfer.

At each transfer step in the chain of custody the content can be verified, and new metadata captured and submitted. Each step contributes to the verifiable temporal history of the data.

In this scenario any cryptographic break in the chain of custody, through tampering or corruption, can be easily identified.

Any entity that creates, and needs to protect, intellectual property can use Truestamp commitments to prove the provenance of their content or invention.

We stand on the shoulders of giants. The concept that an author can pre-publish information about an invention or discovery, while obfuscating its content until a time of the author's choosing, goes back hundreds of years.  There is documented historical proof that such notables as Galileo Galilei, Johannes Kepler, Christiaan Huygens, and Robert Hooke used these methods to protect their discoveries in the 17th and 18th centuries.

They used techniques such as creating an anagram of their key discovery text, and then publishing that anagram for others to see without releasing the content. Once they were ready to divulge their discovery, they could prove both the content and time of their discovery by revealing the original text for comparison with the anagram or cipher and the known time of when the anagram was published or sent in a letter.

There is a delightful direct lineage between this technique and the modern equivalent of capturing the hash of a document for wide publication in a public, and immutable, blockchain ledger. When the content is ready to be verified publicly it can simply be released, and its hash compared to a verifiable time based commitment.

Truestamp, formed in San Francisco, CA, now operating from Ashburn, VA, provides a SaaS platform for anyone to independently claim, and verify, the integrity, timestamp, and provenance of their most important data. By submitting privacy preserving hashes, and provenance info, to our API we create cryptographic Commitments immutably linking their data to the Stellar blockchain. We do this efficiently, at enterprise scale, storing at most a single photo's worth of on-chain data per year in total.

Glenn is a technology leader with over two decades of experience designing, developing, and delivering technology solutions at scale for businesses ranging from blockchain startups to Fortune 100 companies. Glenn has a depth of experience in startup leadership, enterprise consulting, blockchain, distributed systems, cryptography, cryptocurrency, and cloud-based architecture design and operations. Glenn is a proud father of two girls and is passionate about individual privacy, data integrity, and security.